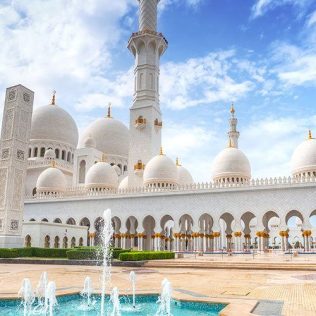 Popular for its man-made marvels, Abu Dhabi, the capital city of UAE, is the second favorite tourist destination after Dubai. Visiting Abu Dhabi can quite easily be a one day affair as the city isn’t that large.

You could hire a taxi for transportation but, for an elaborate experience, one should opt for a car lease in Abu Dhabi. Here’s a list of places you could go and things you could do when you plan a day trip to Abu Dhabi:

Considered as the key site of worship in the whole country, the Sheikh Zayed Mosque is a spectacular site which is frequented by both locals and tourists. The mosque is open from 9 AM- 10 PM and has a free parking space for your car. There is a dress code to be followed in the mosque, so make sure that you dress accordingly. Although, you would still get an abaya (traditional robe) to cover up and enter the premises.

Wander in the Emirates Palace Hotel

Places like The Emirates Palace Hotel are a pure reflection of the luxurious lifestyle that people in this country lead. The Emirates Palace Hotel is an enormous building open for tourists to wander about, taking almost half an hour to explore the whole building. You can get a chance to see several supercars, like Ferraris, Bentleys, and Lamborghinis, parked outside this beautiful hotel. The palace also has an ATM for gold inside, which might seem frivolous to some, but there indeed are several withdrawers.

Notch Up Your Excitement at Ferrari World

Ferrari World, the largest indoor amusement park in the world, is a car enthusiast’s dream come true. Done up in the iconic red color, Ferrari World has all the rides that would have your adrenaline going almost as fast as the rides themselves. Make sure that you reach early as the park shuts down by 8 PM. Ferrari World is also home to the world’s fastest roller coaster, so make sure you put that on your priority list!

Yas Island is a manmade island which occupies an area of 25 square kilometers. It is an upcoming hub for leisure, shopping, and entertainment centers in Abu Dhabi. The Yas Marina Circuit has hosted a couple of Grand Prix events and is a sought-after location among tourists. Visit Yas Island and be amazed by the capabilities of extreme engineering.

Abu Dhabi has huge shopping malls, exquisite restaurants with amazing views, and a long coastline studded with beautiful skyscrapers. To ensure that you don’t miss on any of these, rent a car in Abu Dhabi so you can explore the city at your own ease.