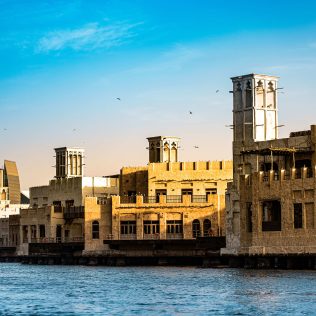 December 2nd marks the day in 1971 when all the separate Emirates in the UAE decided to unite after British rule was rescinded three years earlier, founding the country as we know it today. This year marks 50 years since the foundation of the UAE, and will be marked with spectacular firework displays, kaleidoscopic carnival displays, theatre events, and plenty of food. There’s always lots for families to enjoy and the whole event lasts a little longer than the proscribed 24 hours. If you’re considering visiting the UAE during early December, then here’s our list of National Day celebrations that you shouldn’t miss out on.

Mushrif Palace is the site where the first UAE flag was flown way back in 1971. As a result, this is the place where anyone who’s anyone will go to celebrate National Day. The palace’s gardens, known as Mushrif Park, are likely to be packed with locals, all waiting for the moment when the UAE flag is hoisted to its highest point. If you want to be at the heart of the celebratory action the fireworks, music, and street food will let you know you’re in the right place.

The Constellation at the Founder’s Memorial

Sheikh Zayed bin Sultan Al Nahyan is considered to be the power behind the unification of the seven Arab Emirates, three years after the British withdrawal. Head up to the Founder’s Memorial in Abu Dhabi and on National Day, you’ll be in for a treat with more fireworks, food, and fantastic music. An important part of the local calendar, this is the spot to soak up some history and entertainment in equal measure.

Built in the mid-19th century, Al Bastakiya is one of the Emirates’ oldest sites. In 2005 it was sympathetically restored to ensure that its architecture kept most of its original construction. As a site that saw the rise and fall of British rule, and the subsequent unification of the Emirates, it’s a focal point for National Day. Little more than 20 minutes’ drive from Dubai, it’s the perfect way to experience this national celebration in intimate surroundings.

Also known as the Dhayah Fort, the Resistance Fort was one of the last bastions standing during the 1819 Persian Gulf Campaign. Set on a hilltop, these dusty ruins are an important site during National Day. You’ll find hundreds of people celebrating December 2nd with fireworks, traditional music, and some of the best street food you can find. The weather-worn ruins of this hilltop fortress make the perfect setting for the National Day celebrations, and the colourful costume parades are something worth packing your camera for.

Once an industrial town set on the Gulf of Oman, Khor Fakkan is the site of the UAE’s Resistance Monument. Erected in honour of those who played their parts in the resistance of the Portuguese Invasion of 1507, this stunning memorial is made entirely from glass. As a crucial point in the UAE’s history, it’s a focal point for celebrations and you can enjoy fireworks, music, great food, and entertainment as part of the carnival atmosphere. There are few better sights on Resistance Day than the memorial lit up by pyrotechnics and state-of-the-art lighting. If you’re looking for somewhere that’s intimate, yet touches the national spirit, this is the place to go. Pack your smartphone for some Insta-worthy pictures.

With so many locations across the UAE, celebrating National Day is a great excuse for a road trip. Contact your local Hertz Car Rental branch and make sure you’re ready to celebrate in style, no matter where in the Emirates you are.